Music Producer based in Manchester, UK 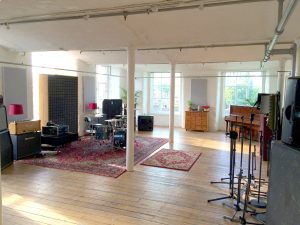 This is my recording studio based in Ancoats, not far from Manchester city centre. It’s a beautiful studio with a great mixture of analogue & digital equipment.

I found the rooms in 2015 and was taken with the natural ambience and beauty of the live room in particular. Having old wooden floors, brick walls and large victorian windows the room had a real magic quality too it all its own. With a diffuse, airy reverberation and lots of natural daylight it was just so compelling. I knew I’d found the right space as soon as I walked into it! So I moved quickly, rented the space and set up the business with some friends and colleagues I knew were all gear mad! Please see https://hopemillrecordingstudios.com/theteam/

It’s a first rate studio that houses two control rooms, one large live space (pictured above) and an iso-booth. It’s a perfect space with loads of natural daylight for recording and mixing bands or large ensembles.

All rooms were carefully considered for their acoustic properties. The control room has been designed to give a nice even frequency response and incorporates a mixture of both diffusion and absorption materials. The live room is open, airy and reflective – great for capturing that classic “ambient” sound. There is also an acoustically treated isolation booth for recording vocals and instruments in isolation.

The studios were built with flexible acoustics in mind to suit the needs of todays musicians and producers. We’ve filled the studios with some great new and old technology – from an old Amek Einstein 40 channel mixing console and a fine collection of mics and pre-amps to the state of the art UAD apollo 16 audio interface and Pro tools 2020 software . We also have a growing collection of classic analogue gear such as- amps, pedals and vintage tape machines.

We have hopefully created a friendly, homely environment which is relaxed and conducive for making great sounding records.